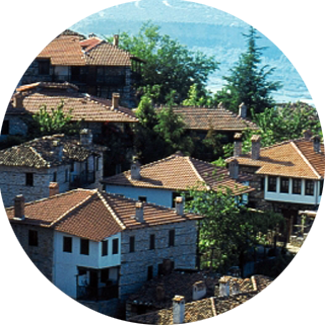 The traditional settlements of Pieria, stretching along Mount Olympus and the Pierian Mountains, are easily accessible and are only a few kilometers away from Katerini and the beaches. They can provide visitors with excellent cuisine and comfortable accommodation as well as with outstanding views of the nature. They are surrounded by impressive forests, characterized by interesting Macedonian architecture, in which the use of stone prevails, and also preserve the appearance of traditional lifestyle.

Palaios Panteleimonas
Palaios Panteleimonas is a traditional, restored settlement. At an altitude of 500 meters in the east slopes of Mount Olympus, with a view of the sea and close to the beach, it is known for its Macedonian architecture. By taking a walk in the alleys, from the old settlement until the square of Saint Panteleimonas with the perennial plane trees, you can travel back in time and get charmed by the view. It has guest houses, tavernas and is appropriate for hiking. During the winter, the permanent inhabitants are no more than 30. In the summer there are many visitors who admire the astonishing view, the unique stone dwellings and the incredible cuisine in restaurants. Palaios Panteleimonas is characterized as a traditional settlement, since it constitutes one of the finest examples of traditional, Macedonian architecture in northern Greece. The settlement managed to maintain its local color, even though it was nearly depopulated since the 1950s, when its inhabitants were massively moving to the bigger settlement of Neos Panteleimonas. In 1980s, however, the situation changed when the settlement was restored and its growth in tourism began. The traditional, local color of the settlement, as well as the small distance from the tourist attractions of Pieria caused its tourism to soar. Tourists choose Palaios Panteleimonas for walks, paragliding, hang gliding, mountain biking and 4x4 Jeep routes.

Palioi Poroi
It is 12km away from Platamonas and it is a traditional settlement made of stone. At an altitude of 450m and with 17th – 18th century stone houses, it is surrounded by a forest and old chapels. It adjoins the wetland of Neoi Poroi and it is located near the coast. Its temples and chapels are well known as are its amazing natural surroundings and lush vegetation.

Palia Skotina
At an altitude of 750m, Palia Skotina is full of old churches, scenic routes and situated in close proximity to the shore.

Petra
It offers an imposing landscape with a wonderful view of Mount Olympus and the Pierian Mountains. An important landmark is the Byzantine Temple of Eisodia Theotokou at the old Monastery of Petra (11th century). It has a lot of tavernas and is ideal for hiking.

Palia Vrontou
There you can find the historical church of St. Nikolaos.

Palia Leptokaria
It is located really close to the shore and the archaeological site of Leivithra among the perennial plane tree forests and it can be a great starting point for walks in nature.

Litochoro
You should definitely make a stop at this scenic-historic town with houses of Macedonian architecture, narrow cobbled streets and chapels before your mountain activities in Mount Olympus. It is a resort with full tourist infrastructure and only 5km away from the coast. It is built at the base of Mount Olympus and it combines everything into a beautiful scenery with a view of the Aegean. It is a starting point for canyoning in Enipeas Canyon and climbing Mount Olympus. You should stroll the little alleys and admire the Macedonian architecture. It has about 7500 inhabitants and one of its tourism attractions is the Holy Monastery of Saint Dionysios of Mount Olympus (both the new and the old one). Moreover, a location called Prionia is also very popular, as it is a trailhead for those going mountaineering or attempting to reach the summit of the tallest mountain in Greece.

Elatochori
It is a small scenic village on the Pierian Mountains at an altitude of 780m. It has an incredible view and it is 28km away from Katerini. It has become one the best mountain resorts in Pieria and is well known for its ski center (at an altitude of 1400-1800m in the location called Papa Xorafi). It first operated experimentally in 2000 and officially in 2001 and high-standard infrastructure for room and board has been created. Tourists usually visit it in the winter, because of the ski center, but also during the other seasons due to the agritourism. In Elatochori, the stone guest rooms offer visitors all the comforts like indoor pools, hammams, jacuzzis and hydro massage. After you take a walk in the spruce-fir forests and allies in the old settlement, you can enjoy warm and homemade traditional, Macedonian cuisine or a more gourmet version in the tavernas and hotel restaurants. You can leave Elatochori full of amazing experiences.