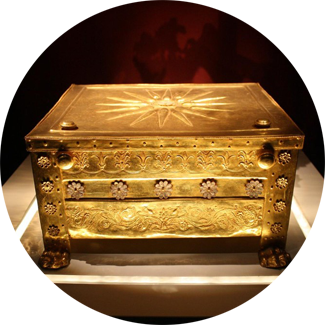 Vergina lies 8km southeast of Veria. There is regular transport service from and to these towns. There is access from Veria to Thessaloniki by road or by rail, through regular bus or train timetables (KTEL-OSE). Furthermore, there is a direct route from Veria to Athens. Vergina is close to Aigai, which used to be the first capital of ancient Macedon. This site was discovered in 1976-1980 by the archaeologist Manolis Andronikos. The name Aigai, of the first town of the Macedonians, means “the area with many goats” and it lies south of the river Aliakmon, in Herodotus’ “Macedonian land”, right in the foothills of the Pierian Mountains, or Pieria, the ancient “Macedonian mountains”.

In the middle of the 7th century B.C, Perdiccas I from Argos, who according to tradition belonged to the generation of Hercules, became the king of Macedonians. Aigai became the cradle of Temenidis; the dynasty which ruled for three and a half centuries in Macedonia. The family’s most celebrated members were Philip II of Macedon and Alexander the Great, who set off from Aigai and changed the history of Greece and the entire world.

The most important sight in Vergina is the Royal Burial Cluster of Philip II, in the ancient dead town of Aigai. A museum displaying all the archaeological findings was built right next to the tombs. It is covered in soil to give the impression of an ancient burial tomb. When entering the museum, the dark environment makes the visitors go back in time. The temperature and moisture levels are stable inside this underground museum, which encompasses the ancient monuments: the royal tombs as well as the marvelous wall painting picturing the Abduction of Persephone and also a representation of a hunting scene. These unique and original masterpieces were created by the great artists of the Classical Antiquity and survive to this day. Awe before death, the royal glory as well as the emotion deriving from the tragic end of the royal dynasty of Temenidis, are the basic concepts to which, the creation of this amazing museum, was attributed.

A lot of exhibits can be found at the museum. However, among the most important ones are the golden larnax, where the bones of the dead king were found, and also a golden wreath of oak leaves, which Philip II used to wear. The golden larnax weighs 11 kilograms and is embossed with the Vergina Sun Symbol. “The Vergina Sun” consists of 16 rays four of them represent the four natural elements-land, sea, fire, air and the rest 12 represent the 12 Olympian Gods. The golden wreath of oak leaves is the most precious wreath of Greek Antiquity. It consists of 313 leaves, and 68 acorns and it weighs 714 grams. Other magnificent items include Philip’s gold-adorned suit of armour, his golden and ivory richly-carved burial bed and his ivory shield. Moreover, visitors can admire the silver funeral urn and the golden oak wreath of Alexander IV, who was murdered in 310 B.C by Kassandros, as well as the golden larnax and the golden wreath representing leaves and flowers of myrtle that belonged to Meda.

Every single exhibit in the museum of Aigai impresses the visitors not only due to their luxurious technique, but also due to their perfect preservation. Apart from the royal tombs in the archaeological site, many more sights can be seen. These are: the city wall with its gate and tower, the ancient theatre, the market as well as the altar of Kyveli, mother of all gods. The archaeological site is located close enough to the museum of Aigai. Aigai has been awarded UNESCO World Heritage Site Status as “an exceptional testimony to a significant development in European Civilization” and a place of natural beauty.